Firstly a reminder that the London Cruise Show takes place at Olympia 20-21 February.  We are able to offer a very special price of just £2. Tickets are £10 at the door.  Book online  www.cruisingshow.co.uk quote 'E1' to claim the discount, or by calling +44 (0)871 620 4024. There are no parking restrictions on the Sunday. 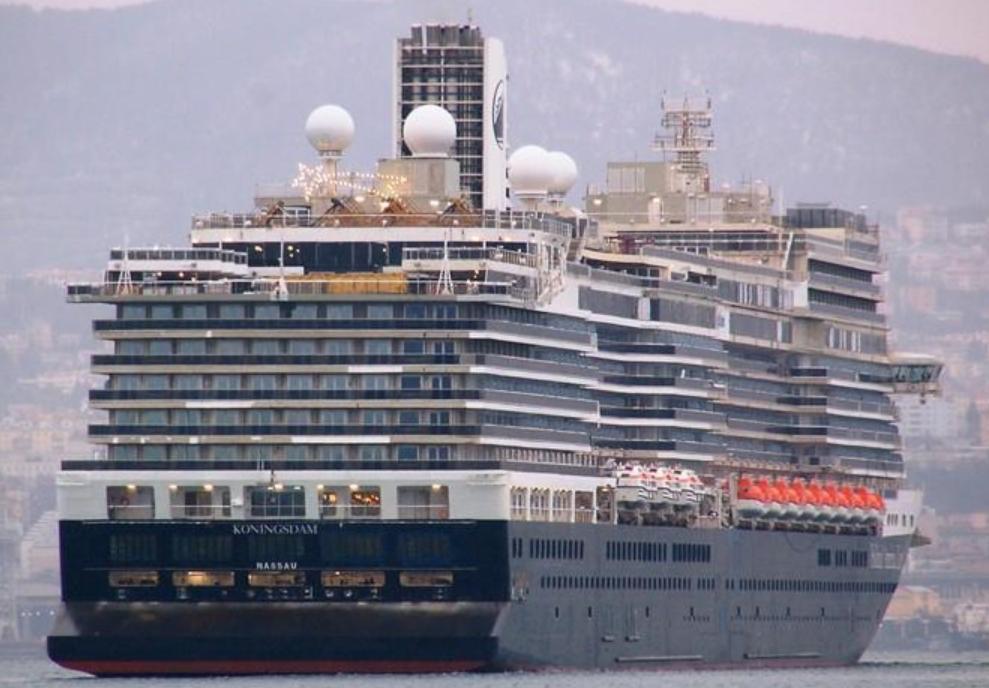 Holland America is one of the world’s oldest shipping companies established in Rotterdam in 1873 and since 1989 part of Carnival Corporation.  Although it has its UK headquarters in the same Southampton building as Cunard and P&O it is run completely separately and rather than Miami reports back to Carnival in Seattle as do sister companies Princess and Seabourn.

Its brand new flagship Koningsdam, at 99,000 tonnes, and maximum 2,650 passengers, is now at the fitting out stage in the Fincantieri facility near Venice.  It has a full European programme for this coming summer starting 8 April based at Rome (Civitavecchia) in the Spring, the period of long daylight hours over the summer northbound from Amsterdam, and once again the Rome port in the Autumn. She departs for her winter home Ft Lauderdale 24 October.  Generally seven or 14-night cruises are offered.  She will be joined in Europe by Eurodam and Oosterdam following major makeovers and also Prinsendam, Rotterdam and Zuiderdam. 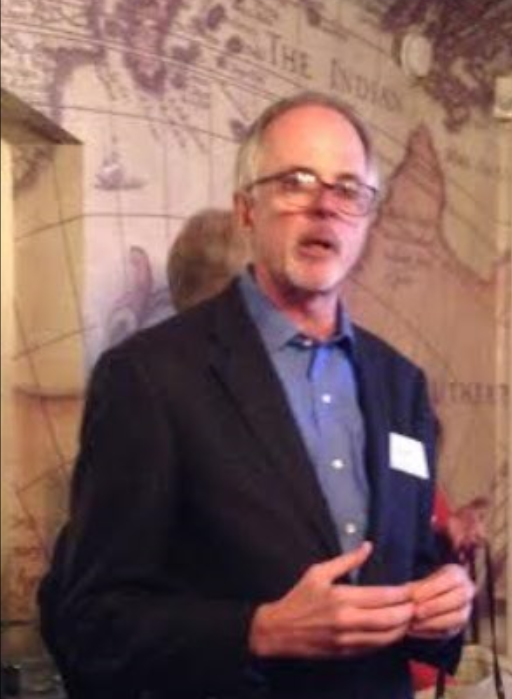 "Koningsdam is a new class of ship for Holland America Line, so everyone was eager to get the ship out in the open water for the first time on sea trials," said cruise line president Orlando Ashford. "Koningsdam delivered a strong performance and is now back at the ship yard for the final phase of work in anticipation of the early April delivery."

The British market is important for Holland America and while it will only offer ‘fly cruise’ this coming summer a vigorous sales campaign is being mounted mainly through the travel trade.

To introduce the programme Holland America chose “Mews of Mayfair” tucked away in Lancashire Court, just off New Bond Street London, once the home of Frederick Handel and in more recent times the late Jimi Hendrix. The upstairs dining room was an ideal setting, extremely vintage but nautical.

Koningsdam features a number of design elements and partnerships that set the ship apart. The ship will feature two new types of accommodation for the line, a two-bathroom family ocean-view cabin that sleeps five and cabins for solo cruisers. An original dining option will be the extra cost French seafood restaurant Sel de Mer, which translates to "sea salt."

While not itself an entirely new concept, more a development, the Culinary Arts Center, which offers cooking demonstrations and instructions during the day, will transform into a dinner venue at night.  The line has partnered with migrogreen specialist Koppert Cress to produce fresh ingredients on board in a glass-enclosed growing trough to be used in the venue's farm-to-table menus.  Once sown, the seedlings will nurture for up to two weeks and then get snipped in their prime for use during dinner.  The microgreens have distinct flavours including garlic, mustard and liquorice, which enhances the taste of each dish served.  Samples were on hand at Mews, and to take away.  Delicious. 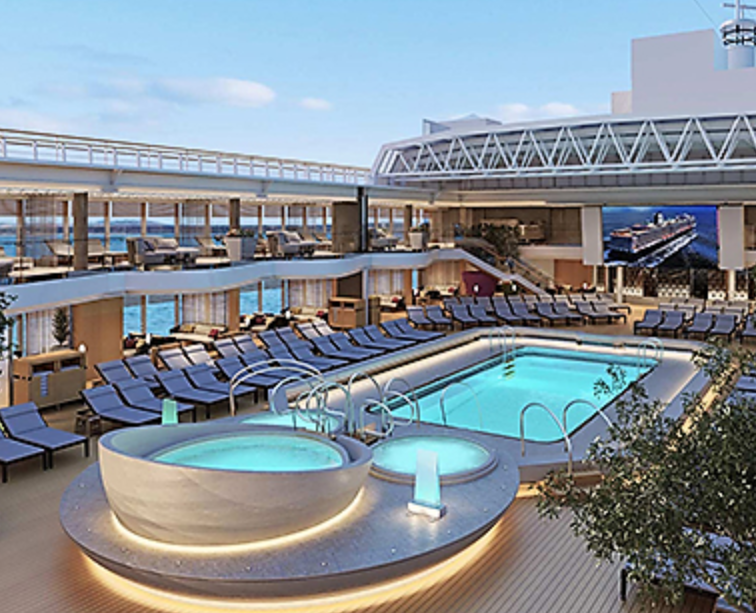 Other dining venues unique to Koningsdam are the Grand Dutch Cafe, The Lido, New York Deli & Pizza and Gelato. The Grand Dutch Cafe will serve Dutch treats, coffee and lagers. The Lido takes the place of the Lido Restaurant on other ships, and will serve pre-made or made-to-order quick serve food. New York Deli & Pizza and Gelato are centred around the amidships Lido Pool along with the traditional Dive-In at the Terrace Grill. The Pinnacle Grill steakhouse, Tamarind with its Asian cuisine and Canaletto serving Italian charge an extra fee. The pool has a retractable glass roof and will feature movie nights with a large outdoor screen. Swimmers and people who like getting wet will find a large alterative in the stern.

Those who like wine and mixing things will enjoy the new venue Blend. Partnered with Chateau Ste. Michelle wine out of Washington, guests will be able to blend their own wine from among five varietals of red wine and take it to dinner or their staterooms.

For music and entertainment, Koningsdam will have a new style of theatre, the World Stage, featuring 270-degrees of LED screens and a stage that can be transformed from a traditional proscenium theatre configuration to in-the-round. The line plans to rotate five productions at the venue.

Three of the ship's entertainment venues are being dubbed the Music Walk. They include the new partnership with The Lincoln Center for the Lincoln Center Stage showcasing chamber music, B.B. King's Blues Club and Billboard Onboard, which will have live musicians performing popular music from five decades.

Traditionally known as the ‘shoulder’ periods, that is when the ships arrive across the Atlantic, or complete world cruise from March onwards, many of the cruise lines have on offer some amazing deals.  BTN has picked out a selection but if you are serious visit your local cruise specialist or rummage around on the web for just what you want.  One word of warning.  Do make sure what you are buying before committing.  Some cruise lines include tips as part of the package, some don’t; likewise with alcoholic drinks; does the package include flights where needed, or parking if it is a UK port? and if you are taking children with you to share your cabin do make sure that your allocated accommodation is suitable.  Ships tend to sail full.  Once on board it is difficult to change cabins.  (We note the Berlitz figures.  Tonnage/passengers/rating and the price is for one with shared accommodation).

We quote the most inexpensive deals applicable.  You can always go for an upgrade.

AZAMARA: With presently just two R class ships, Journey and Quest, Azamara could claim to be the world’s smallest cruise line.  However it is part of Royal Caribbean, and upmarket.  Atlantic crossings are always good value and we have selected Journey (30,000-676-1555) April, 15 nights Miami to Nice via The Azores, Gibraltar, Alicante, Palma De Mallorca and Saint-Tropez.  Prices start at £1,448 include gratuities and spirits/wines but not flights. www.azamaraclubcruises.co.uk

CMV: Cruise and Maritime is one of the few operators to use the London convenient Tilbury port. It’s a 3/4-star product (and  BTN  will be trying in the year) aimed at the British market with some attractive offers. Magellan (46,052-1452-1156) departs 1 April for eight nights visiting Newcastle, Dundee, the Norwegian ports of Ulvik, Sognefjord, Eidfjord,  Flåm and Bergen. Prices start at £639.   www.cruiseandmaritime.com

CRYSTAL:  Crystal Symphony is one of the great cruise ships (51,044-960-1687) and repositions 25 March-10 April, Miami to Monte Carlo (calling at Bermuda, the Azores, Barcelona and Bandol) Included is return scheduled flights, airport transfers and 16 nights in a deluxe stateroom with picture window with all meals and soft drinks, most alcoholic beverages, and gratuities.  Prices from £5,413.   www.crystalcruises.co.uk

CUNARD:  Queen Elizabeth (90,000-2101-1583) completes her World Cruise with a 23-night sector from Dubai to Southampton 17 April-10 May.  The flight to the UAE is included and  BTN  recommends going a few days early to take in a fascinating city hosting, for now, the world’s tallest building.  Your cruise includes Aqaba (for Petra), the Suez Canal, Istanbul, Athens, Valletta and Valencia.  It’s a very British ship except the currency is Dollars.  £1,499 for an inside cabin but you can upgrade even to the Queens Grill.  www.cunard.com

HOLLAND AMERICA:  There is still limited accommodation on Koningsdam’s maiden 'Premiere' voyage 8 April with prices starting from £798 for cruise only.  On what should be a really exciting experience she visits Corfu, Sarande (Albania),  Katakolon (Olympia) and Naples. www.hollandamerica.com

NORWEGIAN CRUISE LINES:  On offer are weekly return departures from New York to Bermuda with three sea days and a chance to view the British Atlantic island.  A few days in Big Apple is recommended at either end.  Norwegian Breakaway (144,000 tons-4028-1434) was specifically built for this market. Cruise only prices start at £874. www.ncl.co.uk

OCEANIA:  If you are a ‘foodie’ this might be one for you. The ship is Riviera (66,084-1258-1682) and the cruise is for seven nights with an inside cabin 19 June Rome to Monte Carlo including flights. She calls at Amalfi, Cagliari, Palma de Mallorca, Barcelona, Provence and Antibes.   The package includes all the specialty dining venues plus a choice of either three shore excursions, house beverage package or US$600 shipboard credit.   There is unlimited w-ifi too.  £1,349.   www.oceaniacruises.com

P&O CRUISES:  We note here the cheapest five-night cruise recently offered on the family friendly Azura (115.000-3,096-1467) from just £349. You will have to pay tips and parking at Southampton but children sharing a cabin come in at a very reduced price.  Departing 25 April the trip takes in Guernsey and Amsterdam (overnight in port) and a full day at sea.  It is a terrific way to see if you like cruising.  www.pocruises.com

PRINCESS:  Very good value is Inner Passage trip on Crown Princess from £1,399 per person outbound to Vancouver 5 May for an overnight stay at the 4-star Westin Wall Centre Hotel before boarding the ship for Alaska.  This is for an Interior Stateroom with an upgrade to one with a window from £99. This package is available only at the  Cruise1st.co.uk web site.

ROYAL CARRIBEAN: Now called Royal Caribbean International (RCCL seems to have been dropped), the company has a whole series of inexpensive deals available from three nights upwards for those that need a short break out of Southampton but we have highlighted a five-night trip on the brand new Ovation of the Seas (as per Anthem 168,666-4180-1528) 17 April visiting Cherbourg, Le Havre, Zeebrugge including one full day at sea.  Prices start at £499.  www.royalcaribbean.co.uk

REGENT SEVEN SEAS:  Luxury cruising but something different.  Seven Seas Voyager (42363-708-1641) from Southampton to Dublin 16-26 June 10 nights via Saint-Malo, Pont Aven, Le Verdon, Bordeaux, Bilbao, Gijon, Cork and Holyhead. For adults who want to share their travel adventures with their children or grandchildren, the  complimentary youth programme is designed for age groups 5-8, 9-12 and 13-17 and is supervised by a staff of experienced and enthusiastic youth counsellors. All balcony £3,399.  www.rssc.com