In our listing of transport award winners for the New Year’s honours list we omitted a now venerable gentleman (81) and one of the greats of general aviation.  However some will only know Bob (officially Robert) Pooley from sword manufacturing which he entered after Wilkinson, the 'name' in the business, decided to concentrate on the razor industry. 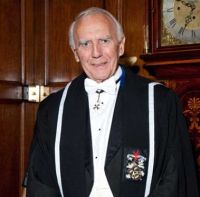 Pooley’s as an aviation name has now been well established for over 50 years as a manufacturer of pilots’ navigational and flying equipment and publisher of technical books relating to flying training, including the United Kingdom Flight Guides.  His son Sebastian runs that business now.

Bob has soloed in fixed wing aircraft, gliders, sea planes, helicopters and balloons.  He was Master (1987-1988) of the Guild of Air Pilots and Air Navigators, now the Honourable Company of Air Pilots and is both a Freeman and Liveryman of the City of London.

In the last nine years Pooley Sword has established itself as a major supplier of swords to the British Armed Forces and the MOD as well as the Commonwealth with a workshop, warehouse and showroom at Shoreham Airport.  He is also a Freeman of The Worshipful Company of Cutlers 2009.   www.pooleysword.com    www.pooleys.com