The newly restored Pulitzer Amsterdam will now open in February bringing an innovative interior design to the hotel that showcases the building’s heritage and architectural splendour.  This follows a phased restoration of the former 45-year-old Hotel Pulitzer to reposition its 25 interlinked Golden Age canal houses as one of Amsterdam’s leading luxury hotels with initially 85 rooms. 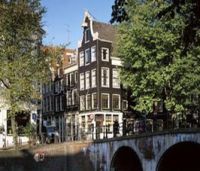 A second phase will begin at that time culminating in Autumn 2016 when the supplementary wing will open to guests on the Prinsengracht canal side, marking the Grand Opening.  Once complete, the hotel will feature 225 guest rooms and suites.

Pulitzer says that exceptional craftsmanship has been demonstrated to enhance the 400-year-old canal houses set in the heart of the Amsterdam UNESCO World Heritage canal district.  The buildings’ modern influences have been stripped back to reveal their hidden beauty and provide the canvas for the new design concept, which combines historical elements with contemporary style.  From trade merchants to flamboyant Dutch aristocrats, past inhabitants of the canal houses have inspired the rich character of the hotel.

Also to be revealed are four exceptional themed suites with private entrances, influenced by the narrative of elaborate characters who may have lived in the buildings throughout the years.  The property is part of the Preferred Hotels & Resorts’ LVX Collection.  www.pulitzeramsterdam.com