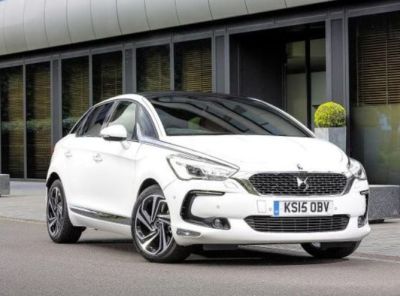 Back in October 1995, under the glare of the flood lights of the Paris Motor show, Citroen unveiled the Citroen DS - a car so ahead of any other car for head turning looks that surviving examples to this day do not, in any way, show the passing of time.

An icon, a motoring milestone, call it what you may, the DS probably shook the entire motoring world, so much so that on launch day over 80,000 orders had been taken. History in the making!

Focus now on the past few years and Citroen has brought to market some very exciting models, stylish and usually very trendy and seriously effective driving machines.

I have been driving the DS 5 version that is the brand flagship offering and it will shortly be joined by DS 3 and DS 4 models and, I suspect further examples as the brand becomes recognised.

Of course, there is a lot of engineering carried over from the well proven and well respected Citroen and Peugeot brands but styling and design is an adventurous departure from either of those brands.

On examination the test car, a top ranking Prestige version powered by a mightily efficient 180 bhp turbo diesel engine, gave the impression of meticulous detailing rather than luxury ornamentation and with driving performance and occupant comfort clear priorities.

In use if gives the impression of a compact sports saloon with adequate interior space though, to the chagrin of my tall front seat passenger, there is a paucity of head space, especially when accessing the wonderfully contoured leather upholstered/heated front seats.

The designers have really pulled out the stops to create a distinctive, businesslike cockpit area with easy reading but futuristic looking main instrument dials with red pick-out and contrasted by an lozenge shaped analogue clock in the centre position.

Some additional items on the test car included face-up speed reading that also defaulted top the immediate direction instructions when running the satellite navigations system, Just to make sure there is also a repeat set of instructions at crucial moments to close to the main instrumentation.

When it comes to driving performance the DS5 is a car that should appeal to the discerning driver. The medium profile tyres provide a ride quality that is slightly from but shock free, the fully independent suspension system very positive handling and road grip and the braking performance is spot on for feel and response.

Steering too is well balanced, light yet responsive though I felt that the turning circle when sorting out awkward parking slots required an occasional ‘second bite’.

When it comes to diesel engine expertise, the power unit in this DS model certainly has a strong CV behind it, this latest 2.0 litre turbo unit is a Euro 6 rated one when it comes to emissions and is dubbed BlueHDI by its creators.

Considering the power it provides and the refined manner in which it is delivered it appears pretty clean at 114 g/km and with a reported official consumption figure of 64.2 mpg, it complements this dramatic looking car. I used a long run through France with a good load on board and managed to see in the range of about 600 miles from the 13.1 gallon fuel tank.

Even loaded the engine is responsive through the seamless changing 6-speed automatic transmission was more than satisfying, the claimed to speed being a realistic 137 mph with 62 mph (100 kph) from rest taking a respectable 9.9 seconds. Figures apart, it feels a lively performer when picking up from low speed to cruising speeds. As expected ,a real mile-eater that does not over tire the driver.

Living with this DS 5 is memorable in a number of ways; there are panoramic roof panels front and back, a mid window rear spoiler that partially obscures rear vision and means that driver has to rely a good deal of the generous sized exterior mirrors (which auto fold when the car is locked) but there is an effective rear view camera when reversing.

The engine also has a stop+start system that obviously saves on emissions and fuel when edging along in traffic, there is a keyless start/stop and the roof panel between the front seats is utilised for some switch gear and that obligatory sun glasses case. There are no grab handles to assist entry/exit to the car.

Practical? A reasonable luggage compartment with rear seat fold facility and a ski hatch though the loading area is challenged by a fairly high lip and there is a puncture kit in place of a spare wheel. Safe? You bet, a Five Star Euro NCAP rating.

In the years since I road tested an original Citroen DS I have had discussions with many notable motoring pundits and very few suggestions were offered as to other cars that made such a great motoring milestone.

The new DS brand is a valiant attempt to create what its makers suggest is an Avant- Garde image - certainly id meets the challenge. An exciting development with , it seems, a lot more to come.

1995? After 18 years of secret development as the successor to the Traction Avant, the DS 19 was introduced on 5 October 1955 at the Paris Motor Show. In the first 15 minutes of the show, 743 orders were taken, and orders for the first day totalled 12,000.[9] Contemporary journalists said the DS pushed the envelope in the ride vs. handling compromise possible in a motor vehicle.[10][11] To a France still deep in reconstruction after the devastation of World War II, and also building its identity in the post-colonial world, the DS was a symbol of French ingenuity.[12] The DS was distributed to many territories throughout the world.[13] Wikipedia