Work is progressing fast to complete an airport for the remote South Atlantic island of St Helena, a British Overseas Territory, perhaps even better known as the final residence of Napoleon.  Previously the island has only been linked to the African mainland, 1200 miles away by ship.

Two calibration flights have been completed but tickets for scheduled services will not be allowed to be issued until the full airport certification has been completed.  Carriers confirmed so far are Comair, with a Boeing 737 link to Johannesburg, and Atlantic Star Airlines which is a new carrier planning to operate a Boeing TUI 757 to the island from the UK.   www.sainthelenaaccess.com 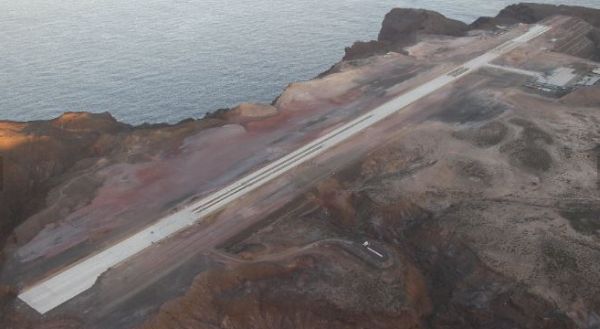 The closest sea link to the African mainland is not the nearest point in Africa, it is Cape Town. The closet sea link to an airport is Ascension. I travelled to St. Helena aboard the RMS from Cardiff in 1993, spent a wonderful week on the island then continued onto Cape Town.

It looks worryingly close to the edge.

Great to see the new runway at St Helena. Are those skid marks that we can see?! Gerald Yon, originally from St Helena, was one of the first two people to work at the Jet Centre at LCY and has now returned to St Helena to work at the new airport there.