Getting ready to welcome guests is the Four Seasons Hotel London at Ten Trinity Square, once the home of the Port of London Authority, and in 1946 host for the inaugural meeting of the General Assembly of the United Nations. 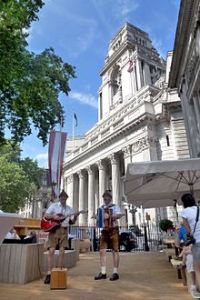 The hotel is expected to open at the end of April when the Canadian group ceases management of a 142-room Canary Wharf property.  Four Seasons is identified with its 5-star hotel in Park Lane and the equally up-market Four Season Hampshire.

The new hotel will occupy the lower ground to the third floor, with 100 guest rooms and suites, restaurants, bars, meeting salons and spa.  The Rotunda Lounge will serve light and casual fare all day.  The French restaurant will be under the direction of a Michelin-star chef whilst an Asian offering will specialise in the creation of carefully curated Chinese and Japanese dishes.

The spa will also be operated by Four Seasons. It will feature comprehensive health and wellness services and treatments, a luxury hammam and sauna, and its own spa café and boutique.

The building featured in the 2012 James Bond film Skyfall. www.tentrinitysquare.com/the-hotel