A new Hilton Amsterdam Airport Schiphol has opened.  The state-of-the-art 433-room property replaces the previous Hilton Schiphol, which dates from 1972.

Created by acclaimed Dutch architects Mecanoo, alongside British interior design company The Gallery HBA, Hilton Amsterdam Airport Schiphol has a distinct cubic design that features a 42m high glazed roof.  Contemporary Dutch influence can also be found throughout the public space and guest rooms.  Spanish artist Israel Páez has created a wide range of bespoke pieces for the hotel such as story-telling tile walls in the open kitchens and a series of headboards for the guest rooms representing the Dutch landscape that gives every space an authentic and local touch.

The hotel is also the largest conference hotel near Amsterdam Schiphol Airport, boasting 23 flexible meeting spaces, including a ballroom with a capacity of up to 640 delegates and offers state-of-the-art audio-visual equipment, making it the perfect location for events and meetings of any size.

The hotel’s 433 rooms include 12 suites with a separate living room, large bathroom and extensive work area and 96 Executive rooms, which allow guests access to the Executive Lounge.

Hilton Amsterdam Airport Schiphol is situated next door to the site of the original Hilton Schiphol and joins five other Hilton hotels in Amsterdam.  www3.hilton.com/en/hotels/netherlands/hilton-amsterdam-airport 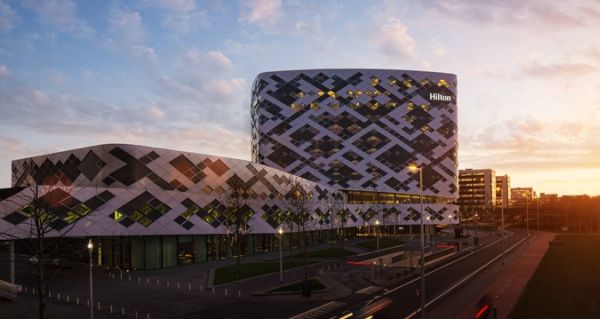