In spite of some serious industrial unrest (strikes) the air carrier’s Lufthansa Group transported 107.7m passengers in 2015, a new record figure.  This was 1.6% more than the previous year with the highest ever load factor, 80.4%.  It corresponds to an increase in capacity utilization of 0.3 percentage points compared to 2014. 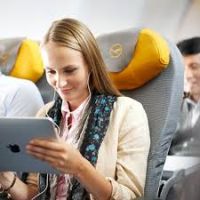 The Lufthansa Group consists of Lufthansa itself, Swiss and Austrian Airlines, all legacy carriers, plus Germanwings, Brussels Airlines and the German-Turkish charter airline SunExpress.  In total, with all the subsidiary support organisations, the group consists of over 500 companies.

Seventeen new aircraft were taken into service last year and Premium Economy was introduced into the long-haul fleet but the airline has specially highlighted the FlyNet broadband internet connection.  With this in mind Lufthansa is introducing from 21 January a free download service for two international publications.  No more asking the cabin staff for newspapers they don’t have and ideal for Economy Class passengers.  Lufthansa will continue to offer print newspapers and magazines in its lounges, in First and Business Class on board and at Berlin, Düsseldorf, Hamburg, Stuttgart, Frankfurt and Munich airports.   www.lufthansa.com