ExCel London, now established as the UK’s top convention and exhibition centre, has signed up with CityJet as its official airline partner. The deal was cemented at a joint press conference hosted by David Pegler, CEO of ExCeL, and Pat Byrne, executive chairman of CityJet. 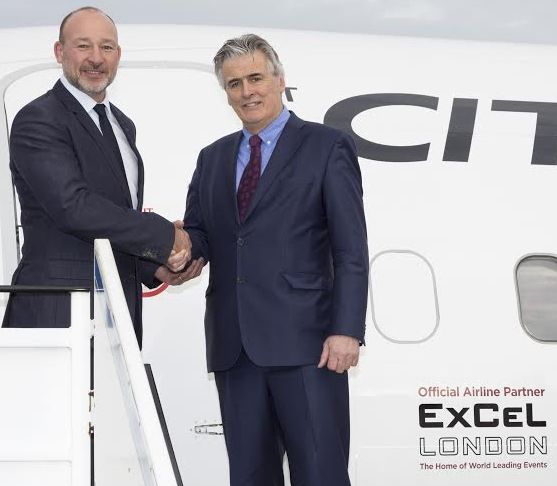 London City Airport is less than five minutes from ExCeL by road and a complimentary service is offered during busy shows. With Crossrail stopping at Excel, and running past London City, it is hoped that a rail station can be opened in Silvertown for the airport.

David Pegler said: “Our partnership with CityJet is another example of how we put the needs of our customers at the heart of everything we do. The proximity between London City Airport and ExCeL makes CityJet a natural airline ally, helping to attract both exhibitors and visitors.”

Pat Byrne was enthusiastic: “It’s an exciting time for both us and ExCeL London and this is an ideal fit and a perfect marriage between two dynamic businesses with similar ambitions for the future.”

CityJet’s expansion plans call for an increase from 18 up to 29 aircraft over the next two years. The airline recently announced the acquisition of 15 Sukhoi Superjets, with the initial aircraft due in May and based in Dublin. LCY certification is expected early in 2017.   www.cityjet.com   www.excel.london