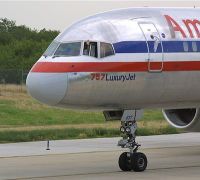 AMERICAN AIRLINES has quickly stepped in to cover the loss of the Delta route from Manchester to New York JFK with the announcement of its own daily Kennedy services as a summer only route from 16 May to 30 September 2010.  The new flight will complement American Airlines' existing year-round non-stop service from Manchester to Chicago (ORD), which operates up to seven times a week.  American will fly the new route with two-class Boeing 757-200 aircraft reconfigured for international operations.  The service will offer a total of 182 seats, including 16 lie-flat Business Class seats.  The airline merry-go-round leaves Manchester with the American transatlantic services, plus Delta to Atlanta, Continental to Newark, US Airways to Philadelphia and the limited Pakistan International Airlines (PIA) operation also to Kennedy.  American also has a large operation from Heathrow with direct services to Boston, Chicago (ORD), Dallas/Fort Worth, Los Angeles, Miami, New York (JFK) and Raleigh/Durham. www.aa.com