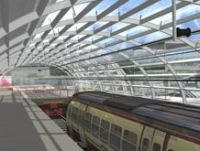 GLASGOW AIRPORT is to lose its proposed rail link after the scheme was jettisoned by the Scottish National Party government in its latest budget cut.  This has bitterly disappointed campaigners having pressed for its introduction over the past 20 years.  The 15-mile route, which would connect Central Station to the airport via Paisley, has been put on ice to save the Government an estimated £200m this year.  Already £47m has been spent on the link which was expected to be completed in time for the 2014 Commonwealth Games and was central to the bid.  Services on the route were expected to operate every 15 minutes. This leaves Prestwick as the only Scottish airport with proper rail connections.