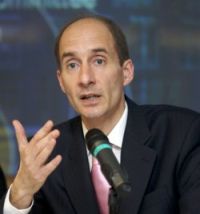 LORD ADONIS, UK Minister of Transport, gave a robust defence of the government’s position regarding the airline industry when he spoke to a very full house at London’s Aviation Club last week.  He said that Downing Street was committed to a third runway at Heathrow, and that the Cabinet would not change its mind over the APD duty rises due to be imposed twice before the end of next year.  Heathrow, he explained was crucial as a hub for railway development and he agreed that domestic air travel was an essential part of the UK’s transport infrastructure.  In a well delivered speech he defended any admission by the aviation sector to greenhouse gas emissions following last week's Committee on Climate Change warning that the industry will be the biggest contributor to global warming in the developed world by 2050.  Skilfully he dealt with a friendly grilling at the end of the speech dealing with four questionnaires at a time.  However, as was pointed out by the club's Chairman, Boeing’s Nick West, in a low key manner, he is essentially an academic, sitting in the House of Lords, and an expert in Education. www.dft.gov.uk