The top-selling 737 MAX makes its public debut a week tomorrow (Tuesday 8 December) when Boeing rolls-out the aircraft from its Renton factory in the US. 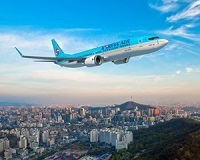 The manufacturer, which has almost 3,000 orders for the version, says it is on track to deliver the aircraft in the third quarter of 2017.

Among customers, Mumbai-based Jet Airways has signed the largest deal in its 23-year history with an order for 75 of the new jets with delivery from 2018 onwards.

Naresh Goyal, chairman of Jet, said the order was an endorsement of the airline’s confidence in the long-term prospects of the Indian aviation sector, and offered “tremendous potential” for growth and development.

Elsewhere, Korean Air has finalised its order to buy 30 of the new models and two additional 777-300ERs from Boeing for US$4bn as part of its fleet modernisation programme. The total order for the 737 MAX could reach 52 if Korean exercises options.

With almost 3,000 orders from 60 customers worldwide, the 737 MAX features CFM international leap-1B engines, advanced technology winglets and other improvements and is expected to use 20% lesser fuel than its predecessors.  www.boeing.com   www.jetairways.com    www.koreanair.com