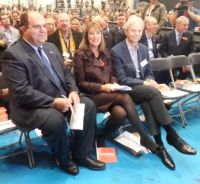 It is the fifth consecutive year of profit for the airline, which credited strong passenger growth and falling fuel prices. Passenger numbers rose 6% to 68.6m and cost per seat fell 3.4%.

Meanwhile, the airline is continuing its love affair with the Airbus A320 with a firm order for a further 36, taking its cumulative order for the type to 451.

The agreement for six A320ceo (current engine option) and 30 A320neo (new engine option) aircraft makes easyJet one of the biggest airline customers for the A320ceo, with 321 ordered, and the A320neo, with 130 on order.

The order suggests easyJet is planning to have an all-A320neo line-up by the end of the decade, though a spokesman was unable to say what the size of the fleet might be as the number of aircraft that might be disposed of was not known.

Former TUI chief operating officer Chris Browne is joining easyJet as a non-executive director from 1 January. John Browett is to step down from the board on 31 December. www.easyjet.com