The French ‘Business Class only’ carrier La Compagnie will add to its Luton – Newark New York service with a Tuesday flight into 2016.  At present it operates daily except Tuesday and Saturday.  Said to be a “boutique airline” La Compagnie operates a 74-seat single class Boeing 757.  Passengers gain a lie-flat seat and AppleIpads connected to the aircraft's built-in entertainment centre.

Already a success in Paris Charles de Gaulle, where it also flies daily to Newark, the airline introduced the Luton flights on 4 April this year.  Chief Executive is Franz Yvelin, a 39-year old Frenchman who sold his original L'Avion Paris – New York airline to BA for £54m in 2008 who turned it into Open Skies.

Yvelin says that he is achieving an 80% load factor on the Paris operation and 60% from Luton.  90% of the business comes from recommendations with 60% on business trips, the balance leisure and family.  La Compagnie fares start at US$2,500 return for two New York – London, about one third of the cost of a legacy carrier.  The airline uses the former Virgin Atlantic lounge at Newark.  www.lacompagnie.com 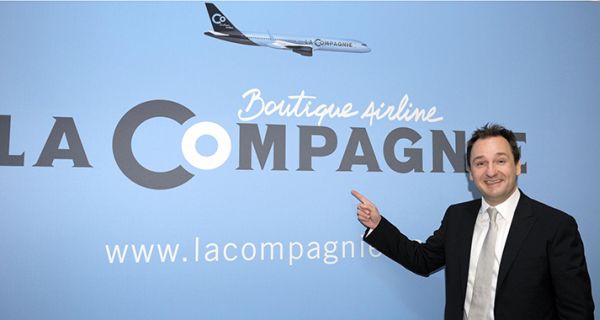