With both Boris Johnson and Zac Goldsmith offering scrutiny last week’s appearance by Heathrow Airport boss John Holland-Kaye before the Commons Environmental Committee was bound to be a testy affair. 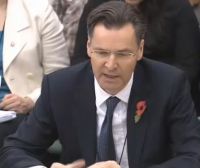 Questioned on reducing night flights Mr Holland-Kaye responded: “It is something that we are looking at and we will make a comment on in due course”.

London mayoral candidate and Richmond Park MP Zac Goldsmith asked Mr Holland-Kaye if he expected the Government to make a decision on expansion “in the absence of clarity from you on that very core condition” of night flights.

Mr Holland-Kaye replied: “I think that is a question for government.  I do see that there are no showstoppers in the conditions that were set by the Airports Commission.”

Mayor of London Boris Johnson claimed the Select Committee session showed that the Airports Commission is “falling apart”.  It did turn down his Estuary scheme!

The former Chairman of the Airports Commission Sir Howard Davies also gave evidence. He added: “Most of the criticisms that have been made (of the Commission) have been picking up things that are actually in the report and giving them a different emphasis from the emphasis we gave them.”   www.parliamentlive.tv