After what might be called a ‘slow start’ the Boeing 787 Dreamliner is really taking off. 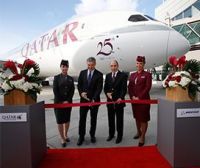 Last week there was an announcement that El Al was taking up to 15 starting in 2015.  Since it was introduced into service at the very end of 2011 some 329 have been delivered from a total of 1,095 firm orders.  Production is running at two per week from assembly plants at Everett, near Seattle, and Charleston, South Carolina.

Also last week Qatar Airways took delivery of its 24th and 25th aircraft in a ceremony attended by Group Chief Executive, His Excellency Mr Akbar Al Baker.  The Middle East launch customer Qatar received its first Dreamliner in November 2012.  Since then it has continued to expand as one of the world’s fastest growing airlines flying to more than 150 destinations, its Dreamliner fleet already serving 30 global points.

“The larger windows with custom dimmers, the lower altitude cabin pressure with rapid air circulation, and the very latest in IFE and seat technology all provide our passengers with the 5-star experience that they have come to expect from us as one of the world’s leading airlines,” he said.”

“Before the end of the year, we will also add two more destinations to our network, including Durban in South Africa, and next year we will launch services to Los Angeles in January, Sydney and Boston in March, Adelaide in May, and Atlanta in June.”  www.boeing.com/commercial  www.qatarairways.com