ON TOUR: The Scenic Rhône

The mighty river Rhône is perhaps not one of Europe’s best known waterways but it stretches for over 500 miles from its source in the Swiss Alps, into Lake Geneva, passing by some of France’s finest vineyards, before emerging into the Mediterranean at Port St Louis near Marseilles. Unlike the Danube and the Rhine these days, whilst very much a commercial enterprise, it is free of the massive cargo barges that commute east to west and visa versa across the vastness of the Continent.

Yes there is the odd working river carrier, but in the 21st century leisure craft dominate. Such are the problems associated with the snow melting from the high mountains that the Rhône’s cruise season is limited and does not start until mid-April.

Scenic justifies the ‘Space-Ship’ name by pointing out that with less cabins than ships of a similar size it can offer proper balconies on both upper decks and as much cabin space as many far larger sea going cruise ships.  Even the small number of offerings on the lower level, partly below the waterline, are of 16sq m, plenty enough for two and generous when with single use.  All accommodation has butler service, free wi-fi, courtesy liquid offerings, and even a complimentary shoe shine and clothes cleaning service.  Breakfast can be taken on the balcony.

Scenic is very much ‘all inclusive’ from the moment you step off your aircraft (or arrive by some other means such as Eurostar) and it is very easy to finish up with a zero extras bill.  Most drinks are free, there is no tipping, and the tours are included.  If you visit the hairdresser or Wellness Centre that will cost.  The cuisine is ‘top notch' and during the course of the trip you will be invited to French themed eating at L'Amour and a degustation  meal at Table La Rive.

Breakfast is a buffet but cooked items are available and there is an omelette station.  Likewise usually lunchtime and here a chef is on hand to prepare a stir-fry.  The ships carry a plentiful supply of electric driven bikes, great fun, but you are on the right hand side of the road.  In any event there is hardly any traffic at most of the little villages where we moored.

What also is of quality is the paperwork from the leather pouch it arrives in (by post including Scenic knapsack and washing bag) the quality folding route map and a branded complimentary ‘Guide to the South of France.  At each stopping place a map is provided, once again branded.  At this point one should also mention the Scenic Tailormade, an electronic GPS device that doubles as the contact with your trip escort, and also serves as a walking tour guide if you want to go off on your own.

BTN Cruise News October 2015 was produced live on Scenic Emerald.  It fits in nicely with this ON TOUR.  You might want to take a look.

Scenic use British Airways and even for an 07:00 Heathrow departure the Aspire Lounge in T3 is open, likewise APH and their agent Purple Parking with a Meet & Greet service.  Heathrow Airport Ltd insists that the handover booths are painted a drab grey, the airport's own offering (established at a later date) mauve.  It can be confusing!  The Scenic host is ready for you at Lyon Airport and then it is a 90-minute coach ride to Chalon-sur-Saône and even at an early arrival time the welcome is very sociable with the inevitable Champagne.  Straight into the lounge with your butler introducing himself and after a short rest the suite is ready.  The friendliness of the crew is apparent, the high standard kept up throughout the trip.

With passengers from east and west (74 Canadians, 44 US, 31 from the UK and 10 Australians) arriving all day this left the afternoon with time to spare.  Chalon-sur-Saône is a delightful riverside town mostly pedestrianised with the old streets containing a very wide range of shops and cafes including medieval half-timbered houses, and the 1844 Hotel Bristol (Town Hall).  Entertainment in the evening by an Edith Piaff impersonator.  Passable!   A boat drill before we move off.  And the regular evening talk previewing the next day. 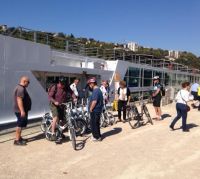 With river cruising you normally travel by night, our first stop Mâcon with the choice of Beaujolais wine tasting, or a visit to the great Benedictine Abbey at Cluny, said to be the largest church in Europe until St Peters Rome was built.  Partly demolished by local builder with the dissolution of the churches after the French Revolution.  Just the morning on tour and it was back to Emerald for an afternoon cruise and Trevoux where we were entertained at the Château de Saint Trys with an enchanting classical programme.  Plus Beaujolais of course.

The Saône joins the Rhône at Lyon, the third largest French city after Paris and Marseilles.  There is a lot to do.  We need to go back sometime.  A group went off by bike to the Botanical Gardens but we chose to visit the Notre Dame Basilica, offering fabulous views.  The Metro serves the peak too. 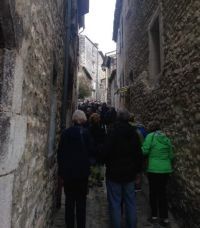 Next day it is Vienne, an old Roman city in a lovely setting and back on the ship for a buffet lunch and onwards to picturesque Tournon and its castle perched up high.  Cocktails once again on the terrace with local guitarists performing.  We are on day 4 and making friends with our colonial cousins from Canada and their neighbours from the United States.  They all sound the same to us!

Viviers is next and a walking tour. This delightful town, nestled between hill and river, boasts ancient homes and the smallest French Cathedral.  We pass Chateauneuf du Pape, another excuse to visit the bar. As the sun goes down Avignon was reached and the famous bridge that inspired the children’s song.   After dinner we enjoyed one of the region’s most entertaining French Chansons vocalists performing on board.

With a river cruise you normally moor right in the centre of the town.  Avignon is no exception and some joined the Chef for a visit to the local market where he selected items for the bill of fare.  The tiny kitchen on the ship has a staff of 12. A group visit was organised.

The Pope’s Palace dates from time when Rome was considered not safe for His Holiness (1309-1377).  It is a massive citadel just a short walk from the dock.  In the Grand Tinel Room music was provided including Mozart, Strauss, Vivaldi and Beethoven.

That was in the morning and we hurried back to the ship for lunch as it started to rain.  And then the heavens opened up with a mighty storm, the leftover from the weather system that caused havoc in Cannes and Nice, not that many miles away.  TV and a film in the cabin was the afternoon event for us, but we could have socialised in the lounge or had some pampering in the salon.

Our final day was at Tarascon, another small French river town and a visit to an olive farm, followed by the Roman Arles Arena, now a bullfight centre.  The night's entertainment was the ‘crew show’ and not a bad effort.

Danube, Seine, Rhine or Rhône are established cruises.  They all have their plus points. Or the Volga from St Petersburg to Moscow.   And the area around Amsterdam. River advocates will not agree which is the best. In 2016 Scenic is offering Lisbon, Porto and The Douro.   More wine country.  And Port too.  A vitality pool will be on the new ship.  I can’t wait!   www.scenic.co.uk