The battle between air and rail for business between London and Scotland warmed up last week when Virgin Trains introduced its new Flying Scotsman locomotive. 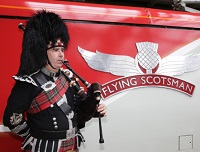 The company has reliveried the engine specifically to promote travel to and from Scotland, with Nicola Sturgeon, Scotland’s First Minister, performing the unveiling.

Virgin, which runs a four-hour Flying Scotsman express service from Edinburgh to London, said the ceremony was a major milestone in the refurbishing of its fleet of trains using the distinctive Virgin red.

Sturgeon commented: “It’s wonderful to see the name of the Flying Scotsman train kept alive on the route with a new, contemporary design."

“The original brought style to the railways for many years. Our new train is a design twist on the legend, recreating the glamour of rail travel for the 21st century.”

In other developments, Virgin Trains will also launch service from Stirling to London on 14 December and from May four additional return services between Edinburgh and London.   www.virgintrains.co.uk