Boeing last week celebrated delivery of a 777-300ER to Garuda Indonesia by painting it in a special SkyTeam livery. The airline became the 20th member of the alliance in August 2014. The new aircraft was welcomed by Arif Wibowo, President and CEO, Garuda Indonesia. 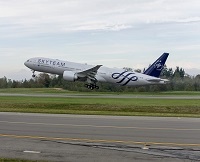 The Indonesian flag carrier operates more than 90 Boeing aircraft, including Next-Generation 737s, 777-300ERs and 747-400s and has been a customer of the US company for almost 40 years.

Officials say Garuda is now looking forward to further expansion with the 737 MAX and 787 Dreamliner.

In all, the airline serves more than 75 destinations worldwide with nearly 600 daily flights and a fleet of 174 aircraft with an average age of less than five years.

The SkyTeam alliance provides access to a wide global network, with more than 16,320 daily flights to 1,052 destinations in 177 countries.  www.garuda-indonesia.com