Etihad gears up for Melbourne

Daily A380 service between Abu Dhabi and Melbourne is to be launched by Etihad Airways on 1 June. 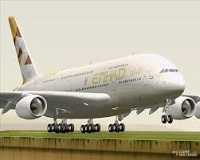 The flagship aircraft will operate one of the airline’s twice-daily services on the route, replacing one of the three-class Boeing 777-300ER aircraft currently deployed.

The double-daily flights from Melbourne will provide travellers from Victoria access to more than 900 weekly connections in 50 markets across the Gulf region, the Middle East, Africa and Europe.

The A380 is also timed to connect seamlessly in Abu Dhabi to the A380 service to London, giving UK-bound passengers an all-A380 ride for the whole journey.

The new service will increase the total number of two-way seats on the Melbourne-Abu Dhabi route by 26 per cent to more than 11,500 a week.

Etihad began service to Melbourne in March 2009 and added a second daily to the route on 1 August this year. It is the only airline offering double daily non-stop services between Melbourne and the United Arab Emirates.   www.etihad.com