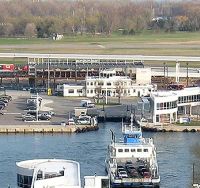 PORTER AIRLINES, the Toronto City based carrier, has introduced services to Boston, its third US destination (after Chicago Midway and Newark New York).  Porter is unique in many ways, the only airline whose main base is on an island with all arriving and departing passengers needing to use a ferry.  Porter's operation at the Toronto airport was launched in October 2006 after some controversy.  A planned bridge to the airport was cancelled in 2003, leading to lawsuits between the airline and the City of Toronto.  In spite of all the aggravation the airline has prospered and now operates 13 locally built Bombardier Q400 (with seven more due).  Other destinations include Halifax, Montreal, Ottawa, Quebec City, Thunder Bay and Toronto.  A service to St Johns, Nova Scotia, begins on 5 October. www.flyporter.com