What in effect is a challenge to Zac Goldsmith has been issued by Jock Lowe, Director of Heathrow Hub. Captain Lowe’s innovative scheme envisages an extension of Heathrow’s current northern runway from its present 12,800ft to 22,000ft in total including the safety margin, in effect offering two runways out of one. 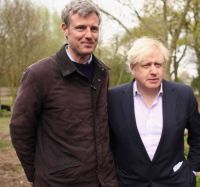 Mr Goldsmith, currently MP for Richmond Park, was selected last week as the Conservative Candidate for the London Mayor election. Goldsmith is vociferous in his opposition to the third Heathrow runway.

"All the London mayor candidates, like us, oppose a Heathrow Airport’s own Third Runway Plan. Our independent plan to extend the runway, currently being reviewed by the Department of Transport offers a political way out for all parties.

"The extended runway was awarded a ‘silver medal’ by Sir Howard Davies. It brings no new communities into the noise footprint, includes a noise mitigation plan and is cheaper and less disruptive to build, while still providing the new capacity required.

"We enjoy good relations with all the candidates and we will be writing to them to congratulate them on their selections and to reassure them that it is possible to deliver vital airport expansion without the political turmoil of Heathrow Airport’s Third Runway plan.”  www.heathrowhub.com

From my IATA days I worked with Jock and respect his ingenious proposal which looks like a good political compromise as he says. However, the real problem is not just the next runway but the one after that . Do not build the first without knowing clearly where the next one will be. Secondly, the future requires a move away from approaches over London. At IATA, I had nightmares about a 747 disaster - could Heathrow survive it? No, we know (I hope) that we need a minimum of twin independent operating parallel runways just to catch up with our major competitors. We are already 20 years behind, please do not make it 40 years, the cost is already massive and increasing.