PLUS A FIRST LOOK AT DISCOVERY

This issue of AERBT coincides with National Cruise Week being organised by the Passenger Shipping Association. www.discover-cruises.co.uk

Oceania Cruises is not a name that comes off the tip of one’s tongue when discussing cruises but the Miami-based company, only established in 2002, has quickly established itself in the mid-size ship market with a quality product.  It currently operates three of the former Renaissance R class ship, Insignia, Nautica and Regatta.  The 2010 programme includes Northern Europe, and both Western and Eastern Mediterranean.  A sister company is Regent Cruises.  Towards the end of 2010 Oceania will debut Marina, custom-built 65,000 tons and up to 1,250 guests. www.oceaniacruises.com

Princess Cruises is really using advanced technology to promote itself in a way that one could not even conceive ten years ago.  With the success of recent online dry dock journals for Golden Princess and Dawn Princess, the line has prompted yet another instalment for the current dockyard visit of Sea Princess.  Visitors to the website can follow along through to 25 September the ship receiving new interior furnishings and finishes, fresh hull paint and exterior refurbishment, plus the addition of the line’s adults-only Sanctuary.  The work is taking place at BAE Systems San Francisco Ship Repair at Pier 70.  Look in the “Ships” section www.princess.com

Seabourn is yet another cruise line using the wonders of the internet to promote a ship still under construction.  For those who have ever wondered how 32,000 tonnes of sheet metal, girders and fittings becomes one of the world’s most luxurious small cruise ships, the answer has arrived.  In anticipation of the 2010 launch of Seabourn Sojourn, currently under construction, The Yachts of Seabourn has released a remarkable video that charts sister ship Seabourn Odyssey’s 2½ year build, from a Genoa dockyard through to its launch in Venice this year, and all in just six minutes.  On line of course.  Seabourn Sojourn is the sister ship of Seabourn Odyssey, a six-star vessel launched earlier this year. To view the video visit the Youtube site

Thomson Cruises is to add Thomson Dream as its new flagship for the summer 2010 season.  Currently operating as Costa Europa, the ship will begin sailing under the Thomson banner in April 2010.  She will participate in a selection of Mediterranean itineraries, increasing Thomson’s highly successful Palma fly-cruise programme.  She will be adults-only during June and September, picking up where The Calypso, which leaves the fleet in October, left off.  The ship itself is bigger and more modern than anything Thomson Cruises has offered before.  Onboard features include five restaurants ranging from the 24-hour buffet to The Grill, an à la carte steakhouse.  The two-storey show lounge has a revolving stage and there are two swimming pools, one of which has a retractable roof. www.thomson.co.uk/cruises

Hapag-Lloyd Cruises’ five-star plus MS Europa will play host to a special UK group this October, for the first classical singing contest to be held at sea.  Organised by The Cruise People, the British party will enjoy the Stella Maris (Latin for Star of the High Seas) International Vocal Competition bringing together the world’s best up and coming young singers from eight international opera venues including the Royal Opera House in London, the Metropolitan Opera, New York and the Milan Opera House, La Scala.  It all takes place on a ten-day cruise sailing from Venice to Barcelona, 25 October – 4 November 2009. www.cruisepeople.co.uk

AMA is once again operating a series of Christmas market cruises down the Danube and finishing up at Prague (and in the other direction) from late November onwards.  It is a fine way to get in the holiday mood, but participants should be aware that whilst the river does not actually freeze, it is not warm either.  Dress up properly and you will really enjoy yourself.  Starting in Budapest (AMA includes most of the ‘off boat’ tours), historic Bratislava is followed by vibrant Vienna, bedecked for the festivities.  Salzburg is an option.  Next up is Melk, known for its famous Benedictine Abbey, and then picturesque Linz and Passau.  Disembarkation is at Nuremburg (including a fascinating city tour) and from there it is on to spectacular Prague (by coach), with its glimmering Christmas Markets. www.amawaterways.com 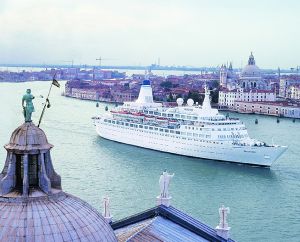 The name Roger Allard may ring a bell with more mature AERBT readers who were involved in the leisure sector of the aviation industry through the 1980s and 1990s.  As a founder partner of Owners Abroad, now as First Choice part of Tui, his great battles with David Crossland and Airtours are largely forgotten.

In 1993, by then Managing Director of Owners Abroad, Roger fell out with the board and took a sabbatical.  Various travel related ventures were tried and in 1997 he acquired the Discovery brand, turning a school ship operation into a cruise concept for those over 55.  Under the All Leisure flag he has not looked back, the company joining the AIM market in 2007 and now includes cruise brands Voyages of Discovery, Swan Hellenic, Discover Egypt and the unique and very up-market Hebridean, which was acquired in the summer of 2009.

It’s off to Harwich 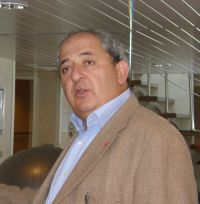 AERBT was invited to view the Discovery ship at Harwich, not a port familiar to your Editor, during a turnaround day in August.  Harwich is much the same distance from central London as Dover and Southampton but also has the advantage of a portside railway station with direct services from Liverpool Street.  Discovery also offers a coach service from central London, Birmingham and Manchester, as well as Luton and Stansted airports.  From anywhere on the M25 the run to Harwich Port is very easy, dual carriageway virtually all the way and parking on the quayside.  The small terminal (which includes a café) copes easily with the maximum 700 passengers the ship carries.

An interesting innovation, which has not been copied by other cruise lines but certainly works for Discovery, are open days.  During the UK summer season, with its fortnightly berthing at Harwich, prospective passengers are invited to come on board, view the ship, and have lunch.  The charge is £20 per person which includes parking and is redeemable if a booking is the result.  Up to 250 prospective clients can be accommodated and it certainly makes for a fine day out.

The Discovery silhouette may be familiar to some.  In an earlier life, as Island Princess, it featured in the successful American TV series “The Love Boat”.  That ran from 1977 until 1986 and in fact gives the game away to some extent.  Discovery is not the latest and greatest in cruise ship design but is a very pleasant throwback to an earlier age of deep sea wandering, extensively refurbished and brought up to date.  Discovery does not have balcony cabins but in most other respects it is contemporary.  It is fully air-conditioned, has both a spa and gym, and also an internet café.

The ship has two (small) swimming pools, one protected by a sliding roof.  A 5,000 book library is provided and there is a dedicated bridge room.  While breakfast and lunch is very much casual, for the evening two sittings are offered and there is alternative dining in an area called the Yacht Club, which becomes a superior bar during the day, for which there is no supplementary charge.  A limited room service is available from 07:00 until 22:00.  Forget about tipping.  Discovery, just like with sister company Swan Hellenic, includes this embarrassing extra in the price.  The working currency is the pound sterling and bar and wine prices looked reasonable (unlike a recent trip with an American-based international operator).

Let’s just say that children are not encouraged and there are no facilities for them, although a few cabins do have additional bunk beds.  Smoking is tolerated in certain open deck areas.

When it comes to the cabins there are essentially four grades starting with the inevitable “owners suite”, very comfortable and spacious.  The junior suite grade are all individual and in their own way reminiscent of Hebridean, without the classic drapes.  On the promenade deck the rooms are of a decent size and even as you go down deeper into the ship what is on offer is more than adequate.

The ship has a cinema on board, plus a spacious cabaret lounge and what is termed the Hideaway Bar nightclub.

What Explorer does offer is a whole series of lectures carefully tailored to fit each voyage and hosted by experts in their fields.

After spending the summer based in Harwich the ship has now departed to the warmer Mediterranean and also the Black Sea before making its way through the Suez Canal, Mumbai, Singapore and Hong Kong, before more or less retracing its passage, with a huge diversion to Cape Town and back along Africa’s eastern coast, to arrive back in the UK at the end of May.  Cruise lengths range from 71 days Cape Town to Harwich, 65 days Barcelona to Hong Kong, and 24 days Venice to Istanbul.  Discovery very seldom goes directly anywhere.  It is small enough to get into ports and inlets impossible for bigger vessels.   The schedule generally breaks down into 14 day segments.  Air travel is by charter flight where the flight distance is less than 4.5 hours.  Otherwise scheduled services are used.

Discovery is very British and is also a leisurely operation.  Clearly it is aimed at a similar market as Saga with a ship maintained to the highest standards but dated in some ways.  AERBT was impressed on what was a short visit.  With Roger Allard as one’s guide it was always going to be entertaining.  Cruise prices are very competitive.