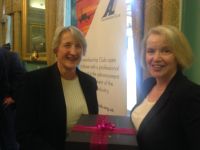 In recent times Peter has held the post of CEO at Brussels Airlines, Caribbean Airlines, Air Southwest and most recently Air Malta

He emphasised that demise of the small regional national airlines was not due to the rise of the low cost carriers.  A survey in Belgium showed that 76% of original Ryanair customers had not flown before.

Asked if he would take on another airline appointment he answered emphatically yes.   Whether that would compete with his role with the Airline Management Group remains to be seen. See also AND FINALLY.  www.airline-management.com