CityJet this week unveiled a new look and earmarked plans for future expansion, a year since becoming independent of Air France ownership. 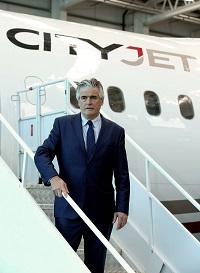 he airline says it has developed "significantly" and now employs almost 500 staff, more than 300 of them at its headquarters in Swords, Co Dublin, where a new call centre is planned. There are additional crew bases in London and Paris.

Pat Byrne, Executive Chairman, described the changes as "a new look for a new era" and said CityJet was at an advanced stage in investment in its fleet, with an announcement expected "in the coming weeks". He added: "We expect to create further employment opportunities in the air and on the ground across our network."  The airline was also investing in technology and customer loyalty services.

CityJet is expecting to carry more than 2m passengers this year on its scheduled-service network, wet-lease programme for Air France and on charter services. Officials say the flagship Dublin – London City route has seen a 40% growth in the past six months, while advance bookings for the new Cork – London City service, beginning on 1 October, are strong.

The new brand and livery will be rolled out on the CityJet fleet over the next few months and the airline is also planning to unveil new uniforms for aircrew and ground staff. New on-board catering is also on the way as part of an overall product upgrade.  www.cityjet.com