Proceeds from the €398m sale of Ryanair’s 29.8% stake in Aer Lingus are to be distributed to shareholders, subject to board approval. The handout, via a B Share programme, is expected to be finalised before December. 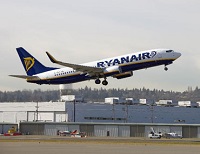 If the deal goes through, it will mean Ryanair will have returned €800m to shareholders this year, and more than €3.3bn over the past seven years. The airline, which is celebrating its 30th anniversary, has also more than doubled its share price over the past 18 months.

Details were released at the AGM last week, when officials also announced Ryanair will grow its traffic by more than 13m to 104m customers during its 30th year.

Shareholders were briefed at the meeting on progress on the airline’s continuing ‘Always Getting Better’ (AGB) customer experience programme, which Ryanair said has enabled it to raise its full-year traffic forecast from 103m and profit guidance by 25%, from €970m to €1.2bn.