Is this idea going to catch on?

The artist presents his views of Frankfurt in 15 different images, each between 15 and 20 metres wide.  The Römer city hall and Alte Oper (Old Opera) concert hall are among the images.

And of course, an homage to the Eintracht Frankfurt soccer team and the zoo is a must as well.

Frankfurt’s unique skyline painted on an integrated bridge pylon presents the core element of this graffiti mural.  The somewhat unusual piece of artwork culminates in a depiction of Frankfurt Airport at the eastern end of the mural.

Heathrow is unlikely to follow suit as far as a soccer team is concerned.  Too many different allegiances where London is concerned, although flying in from the west the Brentford ground can easily be seen!  Hayes (& Yeading) also has a football team somewhere in the depth of the Conference South. 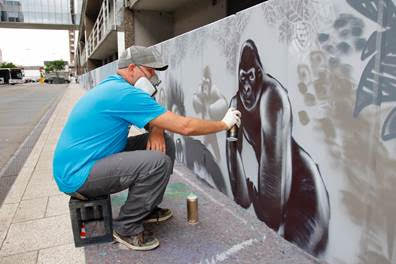