A Gatwick bound British Airways Boeing 777-200 BA 2276 suffered a serious engine fire at Las Vegas, Mccarran,  International Airport last Wednesday 9 September.  All 172 people on board got away relatively uninjured after using the escape chutes as the aircraft began its take-off run.

Whilst in many ways it was a textbook emergency there has been very serious criticism that some passengers took personal belongings with them, stopping evacuation and the potential damage to the chutes.

It is assumed that the emergency drill had been undertaken at this time and that the cabin staff were powerless to remove passengers belongings. Or it may have been just one door?

An initial report suggests engine parts flew out and landed on the runway.  The US's National Transportation Safety Board (NTSB) said the casing around a key component of the engine had been found to have "multiple" breaches.

The British Airways 777-200 fleet is distinct in that two types of engine are flown.  The earlier machines, of which this was one, are powered by GE 90 engines, whilst later aircraft use the Rolls-Royce Trent.  www.ba.com  www.mccarran.com 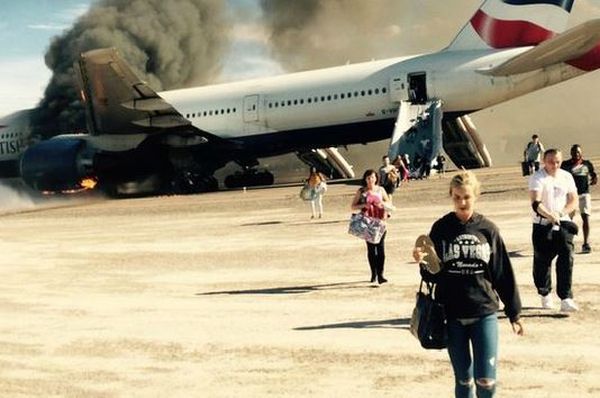 What hope do you have of getting your bags back if you leave them on board during an emergency? Peter Asks. What good does your bag do you if you die because the idiots in front of you got their bags jammed blocking the aisle and you can't get out because of that? Even worse, how would you feel if you were the idiot whose bags got jammed and you still got out without them, but a family of five was trapped behind your bags and died?

Making those carrying luggage off criminally for any injuries or deaths caused by taking personal belongings would change that behaviour. Despicable. Think of how many lives could have been lost if that fire made it to the cabin? Kudos to the entire flight crew for their reaction and action. Lives were saved.

Perhaps these errant passengers are aware of BA';s losing baggage culture. Even when a normal landing is made they regularly loose my bag - what hope what a passenger have in an emergency?