WTM and “the Terminator” 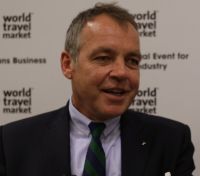 German-born Christoph Mueller became Chief Executive in May 2015, tasked with overhauling the Malaysian flag carrier following years of financial losses and the two disasters of 2014.

Mueller – who has also held senior roles at Aer Lingus, Belgium’s Sabena and Germany’s Lufthansa – is nicknamed “The Terminator,” thanks to his reputation for cutting jobs.

He is axing about 6,000 jobs – reducing the Malaysia Airlines workforce to 14,000 – and is expected to cut unprofitable long-haul routes in the face of stiff competition.

At WTM London 2015, he will talk about how he is dealing with an even greater challenge, at an airline he described as “technically bankrupt.”

Mueller had recruited key new executives to help the turnaround, including Paul Simmons from Flybe as Chief Commercial Officer and Peter Bellew as Chief Operations Officer.

Simmons has experience with two UK airlines – Flybe and easyJet – while Bellew will join from Ryanair where he has served in roles with increasing responsibility since 2006.

The keynote interview will take place 14:00 Wednesday 4 November, at the Platinum Suite 1.  www.wtmlondon.com