Compact Jag Worth The Wait 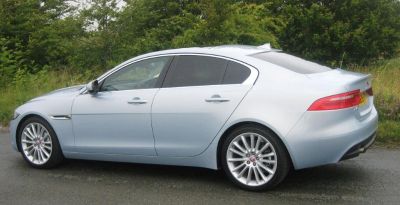 For ages the question was asked why Jaguar had not entered the competition to snatch business from mainly German rivals, in the junior executive vehicle class.

I feel the answer is that it would take a pretty sensational product to cut any ice in a tough market sector. With my first encounter with the new Jaguar XE I feel that the patient wait for a small Jaguar has been worthwhile.  Scaled down a bit from the highly successful XF saloon, the XE follows Jaguar’s design concept by using a front mounted power unit in 2-litre diesel and petrol forms plus a flagship 3-litre V6 petrol unit and with a choice of either a 6-speed manual gearbox or an 8-speed automatic unit.

The underpinnings of the XE feature an advanced independent rear suspension system and, for the first time, Jaguar has adopted electric powered steering. 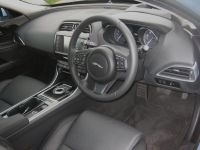 The four-door body is certainly styled in the traditional manner which has always been head turning/eye catching and is impressively finished and trimmed, though the Englishness that had long been the hall-mark of Jaguar interiors has been superseded by the high quality polycarbonates, plastics and metal trimmings (plus, on the test car, simulation wood panelling), materials that are now the standard for all categories of cars.

Admittedly the finish and panel fit on this Jaguar is to an exceptionally high standard as I would expect.

First test features the top 2-litre petrol unit which employs a turbocharger to generate an impressive 237 bhp delivered in a very refined manner and driving through a highly responsive 8-speed automatic gearbox.

Currently the range embraces around 11 variants with the Portfolio specification test car being the penultimate model under the V6 version and thus featuring an exceptionally high standard of finish, including ventilated leather upholstery and extensive equipment, that majors on a lot of high tech stuff. 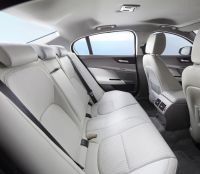 Compact is a fair description of the interior space though the driving position is impressively comfortable aided by a powered adjustable steering column. Access into the front seats is also challenging for taller occupants as the roof line is on the low side.

Rear leg space is not exactly generous but passable and if the front passenger seat is well forward it prevented the glove compartment from being opened.

That said it is an exceptionally comfortable car for two occupants which should suit users who only occasionally need to use the rear seats or require to carry a couple of medium sized children.

Boot capacity is par for the class but where one would expect a spare wheel there is the battery compartment. Oddments stowage around the car’s interior is also not a strong factor.

Importantly on the road this feels, rides and drives like I expect from a modern Jaguar. Stable, quiet running both mechanically and for road noise, a supple ride through the Dunlop tyres and, on this test car, a touch exhilaration with the powered sun roof open and freed from drafts by an automatically extending wind deflector. The latter is a cost-extra option.

Control response is impressive to the degree that one feels part of this car and for performance this lives up to Jaguar’s long standing reputation – top speed is a claimed 155 mph (about the same as the original E Type!) with 60 mph reached from rest in a highly competitive 6.4 seconds. The official combined fuel consumption figure is 37.7 mpg though under mixed driving conditions with no motorway sections, the on-board computer showed just under 29 mpg which should be able to be bettered on longer open road situations or when the Stop+Start system can be utilised in town traffic.

Driving characteristic is real Jaguar, plenty of feel, bags of response through all the controls, a power unit that really delivers – in essence a real driver’s car but also a sensible car for those who appreciate the good things in life but perhaps never likely to fully optimise the outright performance.

Well worth the wait?  I’ll say!