Now called the Boeing 777-9, what was the 777X, has reached a "firm configuration", meaning the aircraft's basic design and capabilities have been determined, setting the stage for design of specific parts and systems.

Boeing expects to build the first 777-9 in 2017.  Output of the current 777 will not slow during the transition, the company has said.  The aircraft, the successor to the 777 wide-body introduced in 1995, will have carbon composite wings with folding wingtips and a metal fuselage.  It will use 12% less fuel and be 10% cheaper to operate than competing jets, according to Boeing.

The 777-9 will carry 400 to 425 passengers and have a range of 7,600 nautical miles (14,075 km), making it the largest aeroplane in Boeing's line-up by seat capacity.  It will be the largest twin-engine aircraft, though smaller than the four-engine Airbus A380.

Boeing is using automated technology to help assemble the 777X, and installing autoclaves, or industrial ovens, in a massive new building in Everett, Washington, to cure the wings under heat and pressure, next door to the assembly line.

The 777X has 306 firm orders and 14 commitments.  www.boeing.com/commercial 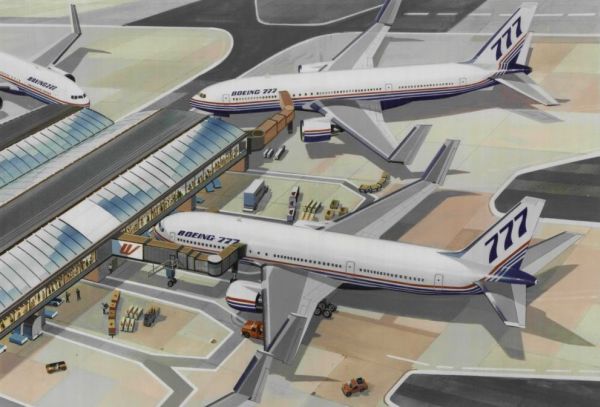