Captain Jock Lowe has energetically led Heathrow Hub Ltd with its ideas to extend the northern runway at the airport as an alternative to an entirely new strip.  The Airports Commission failed to be completely impressed and opted for the alternative Heathrow option.  He believes that the Commission got it right with the airport but wrong with the option.  The Cabinet Committee will finally decide, before Christmas we are told.

Jock retired from British Airways in 2001 after 30 years having spent some of that time flying Concorde.  He was the BA Chief Pilot and Flight Operations Director and completed a year as President of the Royal Aeronautical Society and another as Master of the Guild of Air Pilots. 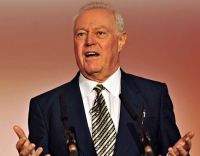 The Airports Commission Report concludes unambiguously that more runway capacity is needed in the South East and that this should be provided at Heathrow.

Heathrow Hub Ltd concurs totally with these conclusions.
The Commission then proceeds to recommend the Heathrow Airport plan for a new third runway rather than the simple Heathrow Hub extended runway concept – despite the latter solution providing the same capacity at a much lower cost whilst avoiding new populations being brought into the noise envelopes.

The Commission Report recognises that there are benefits from the Heathrow Hub proposal.  The cost would be at least £3 billion lower, probably more, and would involve the loss of only 242 homes located in an unattractive position.  By comparison, the Heathrow Airport Ltd (HAL) plan requires the destruction of two villages and a number of facilities including the large Lakeside Energy from Waste plant.

The report fails to acknowledge that the airspace changes to accommodate the operation of the HAL plan would bring large swathes of additional homes into the noise envelopes.

Another major advantage of the Heathrow Hub proposal is the ability to phase construction so that costs can be spread and capacity only released by HMG, for example when noise and emission targets are met.  The present terminals could accommodate additional capacity and all that would be required in the first instance is the extension of the runway and taxiway.  This would represent a fraction of the cost of the final completed scheme and reduce the risk of funding unused capacity.

In seeking to differentiate between the two proposals for increasing capacity at Heathrow, the report of the Commission becomes incomplete, ambiguous and contradictory, this in part is due to the Commission process where debate between their consultants and the promoters was precluded.  The methodology was not iterative in the way that a normal project development would require.

The report outlines five reasons to justify the conclusion that the Heathrow Hub proposal is less desirable than that put forward by HAL.

First, the report discusses capacity and implies that there is a difference.  This is incorrect; it has been demonstrated to the Commission that the eventual capacity of the two systems is equal.  Importantly, the report fails to identify the optimum level of air traffic movements for the UK as a whole.  The Commission’s own advice on capacity needs has varied between 650,000 and 700,000 slots.  At no time was it indicated that planning should adopt the higher figure of 740,000 movements used by Heathrow Airport in their submission.  The economic benefits of the two schemes should therefore be identical.

The report then goes on to suggest that a fourth runway at Heathrow should be precluded by an Act of Parliament without any logic to indicate why economic benefits, which are assumed to be beneficial up to the limit of 740,000 ATMs should be cut off irrevocably at that point.  A more robust argument would be to preclude any planning applications for at least 40 years, at which point the economic benefits could be assessed against the noise and emission levels at that time.  It is not made clear that a fourth runway, with HAL’s parallel runway concept, would be of no value as it is operationally infeasible.  The Heathrow Hub concept however, would facilitate a fourth runway by simply extending the existing southern runway and bridging over a small part of the Wraysbury reservoir.

There does not appear to be any reason to determine the preferential limit on slots, the report merely takes the capacity that the three runways can deliver.  In balancing local and national needs, the lower figure of approximately 650,000 ATMs may be more justifiable than a higher number.

Second, the principle of respite through runway alternation is seen as important for local communities.  There is no definition of what is meant by local communities, nor of how important aircraft noise is to the area involved.  The local communities to which the report refers are limited to two villages, Cranford and Colnbrook and the westerly edges of Hounslow.  According to HACAN (Heathrow Association for the Control of Aircraft Noise), few complaints are ever received from these communities and the runway alternation argument is used by areas further from the airport to limit capacity.

Heathrow Hub considers it much more important to avoid bringing two new groups of the population into the noise envelopes.  The first of these is the properties 1km north of the current approach centreline.  The second is a much larger group, principally to the east of the airport, where airspace changes will be needed for the three parallel runway concept.  In order to facilitate practical operations of the airfield with three approach paths, aircraft will need to be positioned by Air Traffic Control well away from the airport.  Aircraft approaching from the south but required to land on the northern runway will need to cross over the opposite direction traffic.  This will introduce new complications and although the noise levels will be low, they will still be a source of community objections.  There is also inadequate recognition that local respite options are still available with the extended runway plan.

Holistically, there is little difference between the two Heathrow schemes, except for the larger overall noise envelope for the Heathrow Airport scheme.  Both schemes would result in a large reduction in total future noise exposure levels in comparison with the existing case.  For example, the Heathrow Hub scheme reduces the population in the 54 dbLAeq from 632,600 down to 390,000, even after allowing for future population growth.

Third, the report suggests that take offs and landings with the Heathrow Hub plan will be concentrated.  This duplicates the point above – it fails to recognise the advances that are already in existence at other airports of curved and offset approaches and departures.  It also fails to note that westerly departures from the northernmost of the three runways, in the case of HAL’s concept, will bring a completely new area into high levels of noise in Slough.

Fourth, the suggestion that the extended northern runway scheme presents more air quality challenges is based on a false premise.  The road plan submitted by Heathrow Hub assumed the existence of a new large transport interchange to the north of the M4.  Without this facility, a significantly different road plan is required.  This has been prepared and submitted to the DfT.  In essence, for the same number of vehicles, the level of emissions for the two schemes will be identical and in no way is a differentiator.

Fifth, without any apparent justification, the Commission suggests that the extended northern runway scheme will create a more congested airfield with lower resilience.  This, despite an analysis which showed that the airfield will have more than adequate resilience with the Heathrow Hub plan and does not require extended taxiing between the various runways which would be the case with the three runway plan.

Heathrow Hub believes that whilst the Commission Report demonstrated an unequivocal case for an expanded Heathrow Airport, the case for rejecting the extended runway proposal is seriously flawed.  An expanded critique of the report and the factors involved will follow.

It is the opinion of Heathrow Hub that the report of the Airports Commission fails to recognise the simplicity, ease of delivery, lower costs and better community and environmental features of the Heathrow Hub scheme as opposed to that of HAL.

The Heathrow Hub scheme has been designed from the beginning to be a pragmatic and more politically realistic solution for London and the entire country to solve this critical problem.  It is not a new runway but simply an extension of what is there already.  It is a British innovation that could be copied all over the world on restricted sites.  Modern aircraft do not need the 12,000ft runways of old.