Robots at the Crowne Plaza

InterContinental Hotels Group has launched a new delivery robot at the Crowne Plaza San Jose-Silicon Valley hotel.  The robot, named Dash, was created by Savioke, makers of the Relay robot.  Based in Santa Clara, CA, Savioke specializes in robot solutions for the hospitality industry and was first featured by  BTN  8 September 2014   AND FINALLY.   It is now promoted to the serious pages. 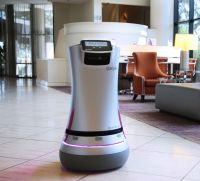 Approximately 3ft tall and weighing less than 100lbs, Dash is designed to travel at a human walking pace and can   independently navigate between floors, even calling the hotel elevator using a special wi-fi connection.  Dash is Savioke's latest version of its autonomous delivery service featuring automatic docking, improved autonomy, and an all new design.

When Dash arrives at the guest room, it phones the guest to announce its arrival, delivers the requested items, and makes its way back to the front desk where it can dock itself into its own charging station.

Steve Cousins, CEO of Savioke, said: “With more than 300 guest rooms, this is the largest hotel to use our robot technology.”

Based on testing at the Milpitas hotel, Crowne Plaza will determine whether or not to roll out the robot at other properties.    www.savioke.com