Dublin could be a connecting airport with Aer Lingus for Ryanair according to Michael O'Leary? 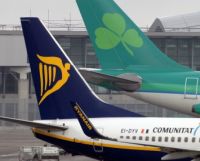 "What we see over the next five, 10 years is that we become a feeder for other long haul airlines," O'Leary said in a Reuters interview.  It would be a major change of policy for the airline that is strictly point to point and does not even connect with its own services.

"The advantage for them is they would get much cheaper short haul feed than they would from anybody else, but what they have to get themselves mentally over is that they would have to take responsibility for missed connections."

Under the proposed system, customers would buy their tickets from the long haul carrier, who would be responsible for checking in the customer, handling their bags and taking responsibility for any missed connections.  He did not mention traffic in the other direction where Ryanair would be the first carrier and responsible if things went wrong.

Ryanair has not yet completed an agreement with Aer Lingus, but O'Leary said it could begin providing feeder traffic for its Irish rival before the end of the year.

"I see no reason why it couldn't happen this winter, November," he said.    www.ryanair.com