Only 38% of passengers ever claim compensation for delays according to a survey by the consumer magazine Which?  of 7,000 readers.  The percentage is probably far less Which? subscribers perhaps more savvy than most.  (See Ryanair and delay compensation in this issue) 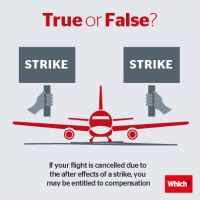 According to the magazine delayed airline passengers are potentially missing out on millions of pounds of compensation, an investigation by the publicity conscious publication has shown.  It has also chosen the busiest time of the year to publish its survey when inevitably there will be delays.

Which? says that it found that between June 2014 and May 2015, 37m passenger journeys to or from the UK were delayed by 15 minutes or more.  No figures were given for a more practical two hours.

According to Simon Calder, travel correspondent of The Independent, compensation claims have become an industry (remember the miners) with up to one third of the payments going to the lawyers.

Those protected by the Denied Boarding Regulation have to be flying with an EU-based airline or flying from an EU airport.  Delays caused by "extraordinary circumstances" are not eligible for compensation, typically bad weather where it is up to the airline to decide on a diversion or cancellation.  www.which.co.uk