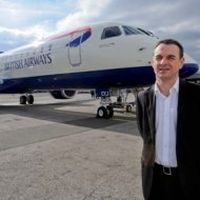 The introduction of AIL will create a regional operation with substantial scale and reach: 46 aircraft, carrying approximately 1.5m passengers each year, turnover of circa £200m and employing 960 people, flying 47 routes across 10 countries in Europe from Sumburgh in the Shetland Isles to Toulouse in the south of France.

The investors in AIL, successful entrepreneurs Stephen and Peter Bond have a long history in aviation, having previously owned Bond Aviation in the UK and original investors of Alliance Airlines in Australia.