The brand new international airport on the island of St Helena (HLE) in the South Atlantic is finally taking shape almost four years since the contract was signed to start its construction. 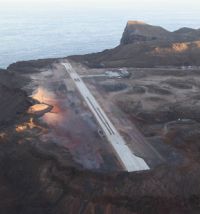 The British Overseas Territory – one of the most remote islands on earth – has always relied on the sea for communication and transport to the outside world.  However, with the regular passenger-carrying vessel, the RMS St Helena, due to be retired next year, the need for an airport became a priority.  Long-term an airport was cheaper, and more practical.  With the runway in place work is now beginning on lighting, navaids and other infrastructure.  Following this, calibration work will be carried out.  The first scheduled flight is planned for May 2016.

Carriers confirmed so far are Comair, with a Boeing 737 link to Johannesburg, and Atlantic Star Airlines which is a new carrier planning to operate a Boeing 757 to the island from the UK.