Airlines and airports continue to wait on the Department for Transport (DfT) to hear about progress on the Regional Air Connectivity Fund, announced in the 2014 Budget to enable carriers to secure development funding to start tertiary routes from UK airports that currently handle less than three million passengers a year.  An announcement was suggested by the end of July.  There has been no response to a DfT enquiry. 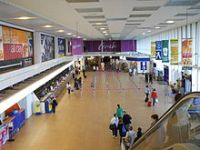 Two PSO routes were quick to get funding as important lifelines – London City to Dundee and Gatwick to Newquay – but other bids, including a proposal by Stobart for Southend to Carlisle, Oxford to Dublin/Amsterdam and Norwich to Paris have yet to be considered.  Whether more routes or airports (Northolt for instance) can be added is not known.

The Fund was announced by the UK Government with a commitment of £56m to attract 20 new regional routes, acknowledging that smaller airports have a vital role to play in improving connectivity, increasing trade and creating new jobs in the regions.  www.gov.uk/government/news/19-new-regional-air-routes-bid-for-start-up-aid-funding