ON TOUR: The London Meetings Show

John Burke is a travel writer with 40 years of experience attending conferences and visiting congress centres all over the world. 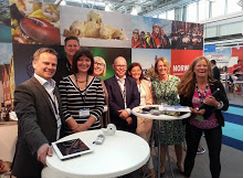 The now annual Meetings Show is to move to a larger part of Olympia following further fine growth all-round at its third event from 7 to 9 July.  Numbers rose despite the London Underground strike on its closing day. Olympia is these days well connected by Nat Rail lines.

The event saw a big increase in hosted buyers, especially British ones, with a good 12,000 appointments made in advance.  The number of exhibitors is up from 400 to 600 with newcomers ranging from the French and Italian convention networks to ten additional English cities.  The Ritz Carlton and Steigenberger Hotel Group were also there for the first time.

In terms of stands, representatives or business, the Meetings Show reached out to 31 European countries as well 14 in Asia, five in Africa and a couple in the Pacific.   A dozen regions of the Americas were promoted, mainly through hotels, but the Caribbean Tourism Organisation had its own stand, serving rum punch.  A hotelier from Bordeaux gave an evening reception with wine-tasting.

Teeling’s whiskey from its visitors’ centre in Dublin was available on the Irish stand which, surprisingly, had no representative from Galway.  Malta and Gibraltar had their own stands as did the Scandinavian countries.   Arvid Lindgren from Bergen said, “Our pitch is that we are only two hours from London, with the unique fiords for post-congress excursions.”

The show’s widest access was to 156 congress-cities or conference centres as far apart as Bangkok and Bratislava or Tallinn and Tokyo.  Almost as important were contact-points for 137 hotels, some as chains like Accor and Barcelo with their own stands, while others had sales representatives sharing space, and agents were there for various hotels and venues.

For example, the Dutch stand had a mixed team representing accommodation and agencies as well as the tourism board’s head-office whose conference specialist, Sven Boelhouwer, commented,  “Although this is a newish exhibition, the quality of buyers is good.  A presence in London is important for us because Britain is a key market for our meetings and events industry.”

Participants also included 63 destination management companies, including Wedgwood DMC, but rail travel was even more poorly represented than airlines, and there was nobody at all marketing shipboard conventions. By contrast, 18 sporting venues exhibited.

There were 18 stands covering technical and other services such as IDentilam of Horsham that prints badges.

Technology also featured prominently in a concentrated programme of 64 lectures in four rooms during the three-day show.   Other subjects ranged from costing to catering, but there was nothing about security, although Hiscox Event Insurance exhibited.

Amelia Walker on the PA Life stand said, “Safety is always a matter of concern to personal assistants who arrange or attend conferences as much as they book travel for their managers.”

Quite separately from the lectures, the busy schedule also included the opportunity for informal interviews with several experts on aspects of conference-planning.

The Meetings Show is the latest project from Centaur Media which also organises the Business Travel Show,  at Olympia as well.

Backers of the Meetings Show range from the London Chamber of Commerce to the Association of British Professional Conference Organisers.

The event’s Director, Stephen Knight, explained, “The move to Olympia Grand in an earlier month is because what has steadily become a bigger show will be unified in a single, more cohesive environment, providing even more business opportunities for both visitors and exhibitors.”

He added that with seven hosted buyers for every five previously, both the supply and demand side of the industry clearly want them to be the event’s cornerstone, and they will again have two lounges separate from the business networking area.  Next year’s dates are 14-16 June, the preceding Monday being for the Association Meeting Conference which itself has seen attendance up by 49% on last year.

Veteran exhibitors and participants have commented that Olympia is a much superior venue, regarding both transport and comfort, to ExCel out in London’s Docklands.  They noted that International CONFEX, which slightly overlaps the Meetings Show, had returned from ExCel, and will be at Olympia again on 2 and 3 March 2016.  www.themeetingsshow.com