Stephen Timms, Labour MP for East Ham, has presented Declan Collier, Chief Executive, London City Airport, with a Responsible Business Champion commendation by the All-Party Parliamentary Corporate Responsibility Award Group (APCRG).  It could be seen in defiance to Boris Johnson who has used his power as London’s Mayor to reject an approved planning application by the airport.  This has gone to appeal. 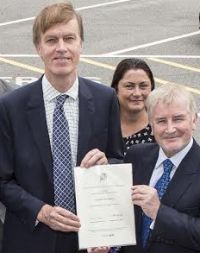 The award is part of the APCRG’s responsible business scheme for which MPs are invited to identify an outstanding local business which they believe deserves to be their Constituency Responsible Business Champion on the basis of its positive impact on their constituency.  London City will now enter the running for the national version of the award, up against the likes of local departments in Fujitsu UK (Basingstoke, Hampshire), Marks & Spencer (Loughborough, Leicestershire), and Sony (Ogmore, Glamorgan) announced on 15 July.

Mr Collier tells  BTN  that the airport is booming and should top 4m passengers this year.  In 2011 the figure was 2m.  British Airways is now easily the largest operator with 20 aircraft using the facility daily.

He points out that it is probably the easiest airport to get to from Westminster, via the District Line and Tower Hill DLR In zone 3.  www.londoncityairport.com