Whilst Ryanair ponders on the future of its Aer Lingus stake, and also no doubt considers what to do for its 30th anniversary in July, the airline has announced record profits for the 12 months ending 31 March. 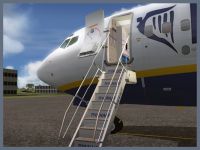 A drop in fuel prices and record passenger numbers has boosted profits 66% to €867m.  This new figure can be put down to the Ryanair ‘being friendly’ campaign, which boosted the load factor, and also much more caution with fuel hedging.  The airline was known to get it wrong last year.

David O'Brien, Chief Commercial Officer of Ryanair, insisted that Heathrow is of "no interest", even if IAG were forced to offload some take-off and landing slots if it succeeds in buying Aer Lingus.


Ryanair has previously said that there are three airports in Europe that the airline will not use because costs there are too high, and because congestion makes it too difficult to achieve its 25-minute aircraft turnaround.

Its new social approach does not include using air bridges.  With Ryanair you must use the steps, and possibly get wet.  www.ryanair.com