The 10-day pilot’s strike at Portugal's flag carrier and Star Alliance member TAP is over.  It ended on Sunday 10 May.  The objective was to highlight the airline’s privatisation.  The Portuguese government says it lost €35m in revenue and resulting expenses, but expects no further obstacles to the airline's planned sale. 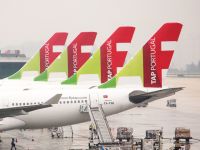 "The privatisation process continues.  It is necessary to ensure that TAP remains viable and sustainable, to ensure its recapitalisation," Pires de Lima told a briefing.

"In just a few days we will know the proposals by bidders," he said, referring to a 15 May deadline for binding bids to buy a majority stake in what is now a wholly state-owned company saddled with debt worth  €1bn.

Pires de Lima accused the pilots' union of irresponsible actions, but said the strike had "failed" because TAP had carried out 2,017 flights in the 10 days of the stoppage that ended on Sunday, 70% of all scheduled flights.

The union has said that the strike halted half of all flights and has not ruled out further forms of action to press its demands.  www.flytap.com

In view of TAP's strike and debt, why is it wasting so much money on a PR agency in London?