The trend towards constructing airport cities or aerotropoli will serve to exponentially boost airport revenues, reports Frost & Sullivan, the financial consultancy, in an aviation survey. 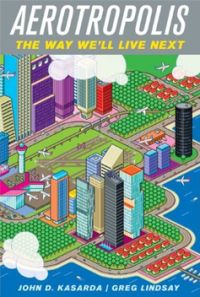 Airports have traditionally been dependent on passenger traffic for revenues but travellers’ expectations are changing, airports diversifying their income sources.

“To achieve this balance, airports are investing heavily in optimising revenue per visitor,” says the report. “Providing parking facilities, conference rooms, and boarding and lodging facilities opens up new opportunities for income generation.”

Apart from an increased focus on non-aeronautical revenue, governments and airports are constructing airport cities to boost overall business.  An aerotropolis or airport city is an urban planning and development concept in which an entire community’s business revolves around an airport and its related activities.

“This centrepiece approach is expected to significantly drive revenues for airports.  However, airport cities are long-term strategies.  It will require the consensus of a host of stakeholders along with effective planning and execution to make the concept commercially viable on a global scale.”  www.financialservices.frost.com  www.aerotropolis.com/airportCities/aerotropolis-the-way-well-live-next