Just 75 years ago, on 30 April 1940, Air New Zealand made its maiden appearance, a Shorts S30 flying boat, with nine passengers on board, taking nine hours to fly between Auckland and Sydney. 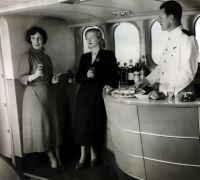 The anniversary flight was somewhat shorter, four hours in a Boeing 787 Dreamliner, customers treated to a 1940s-themed menu and a mid-air fashion show of the airline’s uniforms through the decades.

“As the national carrier, our history is just as much about New Zealand as it is about Air New Zealand so this is something for all of us to celebrate together,” said Christopher Luxon, Chief Executive Officer:  “It really has been a remarkable journey and we want to thank New Zealanders for being part of it.”

Today part of Star Alliance, ANZ started life as Tasman Empire Airways Ltd (TEAL), taking on its popular label when it became government-owned, as it is today (53%), after various ups and downs.  Air New Zealand and its subsidiaries serve 22 domestic destinations and 26 international destinations in 15 countries and territories across Asia, Europe, North America and Oceania.  The airline last year took delivery of the first of 12 Boeing Dreamliners and also operates 26 Airbus A320 series and 15 Boeing 777 aircraft.  The final 767s are being disposed of.  www.airnewzealand.com