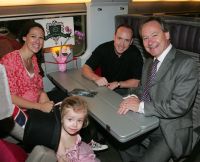 EUROSTAR last Friday (28 August) welcomed its 100m traveller, David Kemp (aged 35) from Highgate in London.  He was accompanied by his French wife Stéphanie and daughter, Mia (aged 2).  The family were met at St Pancras International by Eurostar's Chief Executive, Richard Brown.  There was a celebratory ceremony at the station before they boarded the 09:00 to Paris with over 700 other travellers leaving the UK for the August Bank Holiday weekend.  The Kemps were travelling to Paris, then by TGV to Lyon where they are attending a family wedding.  Introduced in November 1994 Eurostar has achieved a 71% market share for London – Paris and 65% for London – Brussels routes and this year is expected to carry a record nearly 10m passengers. www.eurostar.com