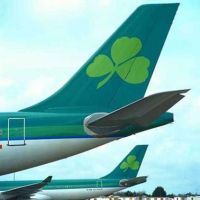 AER LINGUS future as an independent airline is in question following a disastrous half year and seemingly negative attitudes by the senior management.  At the moment the airline does not have a Chief Executive, Dermot Mannion resigning in April saying the airline needed fresh ideas, and controversial new appointment Christopher Mueller not yet officially arrived until next week.  The carrier has reported a €73.9m loss for the period and is haemorrhaging cash.  The airline is reviewing its Airbus A330 operation and delaying A350 XWB deliveries although they are a long way off.  A staff cull is anticipated.  In the shadows Ryanair hovers with a near 30% stake while the government and Aer Lingus staff, past and present, own 25% and 14% respectively.  The EU has banned a possible O’Leary takeover until 2010 and his offer price reduces every time it is mentioned. www.aerlingus.com