Hogan at the Aviation Club

James Hogan, President of Etihad Airways, could not have timed his appearance at the latest London Aviation Club luncheon better.  He was speaking the week after European and US carriers attacked the airline’s rapid growth over the last decade. 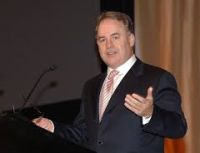 Not, he noted, British Airways.

“There’s one global airline that hasn’t complained about the new competition from the Gulf carriers – and that’s your home airline here, British Airways,” he said.  “BA is a business whose steel has been forged in decades of fierce competition – domestically, across Europe and globally.  Willie Walsh doesn’t complain when he sees new competition come into the market – he just gets on and competes!”

Addressing a packed Institute of Directors he said:  “Investing in success is not a crime; blocking competition would be.  The dark clouds of protectionism are gathering over Europe and the United States.  Five mega-carriers are trying to pull the ladder up after years of having it their own way.  The people that will really lose if these giant legacy airlines are successful are the millions of travellers benefitting from new choice in the global air travel market.”

He finished by talking competition:  “People want choice when they travel.  That’s the same whether you are sitting in Abu Dhabi, or in London, Manchester or Edinburgh.”  www.etihad.com