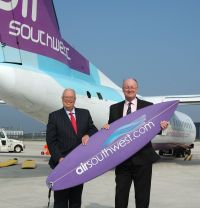 PLYMOUTH CITY AIRPORT has finally closed its alternative short runway 06/24 and now will rely totally on 13/31 which is 1160m long, fine for Air Southwest Dash 8 services but fractionally too short for the ATR 72, Bombardier Q400 and Avro 146 operations.  As reported in AERBT the land made available by the closure will be partially used for housing, and also improving facilities at the airport.  Air Southwest Managing Director Peter Davies notes that the majority of UK airports have a single runway stating the closure will not impinge on the airline’s operations.  He confirmed that the Air Southwest’s winter programme will be basically the same as the summer operation “with a few trimmings”.  The new twice daily service to and from London City was, as predicted, having a marginal effect on the airline’s Gatwick operation, which is four times daily.  With tickets sold single sector, passengers are often finding it more convenient to fly one way into one London airport and back from the other.  He pointed out that the air fares were more than competitive with that charged by the railway. “Even parking is cheaper”. www.plymouthairport.com