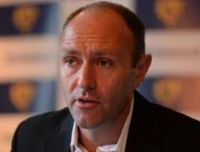 Last Monday, in a interview with the Financial Times, the airline’s Director of Marketing Kenny Jacobs indicated that the carrier planned to go ahead with the long-anticipated development.  The report stated Ryanair was talking to manufacturers for new aircraft to launch the services, which would cover a network of between 12-14 cities on either side of the Atlantic.

In the past, Ryanair CEO Michael O’Leary has frequently talked about his desire for North Atlantic flights, but this was the first time the board was said to have given the go-ahead.

Late Thursday afternoon, however, the airline issued a statement on the London Stock Exchange, doing an about-face: “In the light of recent press coverage, the Board of Ryanair Holdings Plc wishes to clarify that it has not considered or approved any transatlantic project and does not intend to do so.”

Not quite the end of the story.  It appears that transatlantic flights remain very much part of the airline’s plans at some point in the future but would be run by a separate company, with a separate brand.